The Flatbush Dutch Reformed Church: Doing Good in the Hood Since 1650 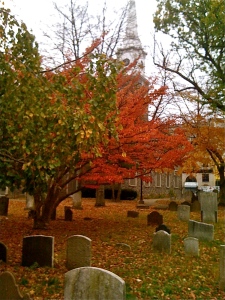 Mawkish: Adjective, meaning sickly sentimental, or falsely and excessively sentimental. Etymologically, it comes from the Middle English word for maggot.

Packing makes me mawkish. So does passing by the Flatbush Dutch Reformed Church, which I’ve been obsessing over for the last year, and which I will surely miss almost as much as my Troutly tribe.

So, here’s some history:

In the early 1650’s, Peter Stuyvesant, director of the Dutch West India Company cum peg-legged Director-General of New Netherland – let’s call him Governor of New Amsterdam, shall we? – thought to alleviate the brutal commute of church-going Long Islanders. So he sent his Dutch brethren to the middle woods of Breucklyn to establish a church in a small Dutch community that had been forged there in the 1630s. This area, the 5th settlement of the County of Kings, was indiscriminately called Midwout (I’ll let you work that one out), or Vlacke Bos (eventually anglicized to Flatbush), though the charter that would define the boundaries and make things “official” would not come for thirty more years.

By 1660 a church was erected that adhered to the strict guidelines of peg-legged Pete: a cross-plan measuring 60 or 62 feet long by 28 feet wide. The project cost a whopping 4,637 guilders, or approximately $1,800. The dates I’ve found vary, but one can fairly assume that the church was in use by 1654, especially since this handy plaque inside decrees that it is so:

A second church was built around forty years later. One account says the congregation grew too large 40 years later, while another references the second structure existing during the revolutionary war and sounding warning signals that the British were nigh. These dates don’t coincide, but most accounts agree that the church, as it is now, existed by 1796. A more astute historian than I may have more academic conjectures. Today the Flatbush Dutch Reformed Church is the oldest church that has continuously operated for religious purposes in New York City. I learned the church’s delightful slogan, which I’ve used as the title of this post, when there was a fire in the community building on the property a few months ago.

The cemetery, though, is my true love. Creepy, perhaps, but you must understand that I come from people who like to picnic amongst their dead. Because Nana might as well be social even if she has been dead for 40 years, am I right? In any event, there’s rarely a day that I don’t detour through the Dutch cemetery. There are somewhere around 108 graves in the lot, though one of those is a mass grave for the soldiers who died in the Battle of Flatbush during the Revolutionary War, bringing the resident count up considerably. The graves date back to the 1660s, but some of the more notable dead are the folks who settled Brooklyn, and whose names you’ll likely recognize from local street names. These include Lefferts, Lott, Ditmas, Dimars, Clarkson, Cortelyou, Martense and Vanderbilt. Indeed, Senator John Vanderbilt, who died in 1796, gave the Church its bell.  And it’s still in use today. Vanderbilt also established Erasmus High School across the street, a famous landmark in its own right – the land was acquired from Aaron Burr, Alexander Hamilton, Peter Lefferts, Robert Livingston. The high school was the first secondary school chartered by the New York State Board of Regents – and has a number of very famous alumni including Mae West, Babs and Sweet Caroline’s crooner. But that’s another post all together.

The graves that have not been entirely worn away, splintered or toppled over are quite lovely. Many of the inscriptions are in Dutch and I found a few translations online, though my favorite is the staunch protestant taunting by Mr. Phillip Nagle, who was once a member of the Provinical Congress:

Behold and see as you pass by,

As you are now, so once was I;

As I am now, you soon will be,

And the saddest grave belong’s to a boy named Tommy. This sounds like a bluegrass song to me:

Little Tommy was our darling,

Pride of all our hearts at home;

But the  angels floating lightly

And so faithful and patient readers, we’re back to mawkish me. I describe myself as such partially due to my hyperbolic tendencies, and partially because as sad  as I am to leave all the parts of Brooklyn I love so much, some of this is false sentimentality. Because I’m thrilled to depart on my grand adventure, and beyond excited about discovering Morocco’s hidden historical wonders that will make my lovely church seem like a toddler.