We raced a Moroccan sun. “If we time it right, you’ll see magic twice from the terrace,” I explained to my friend Natalie. “First when the sun sets, and then again when the square twinkles to life.” We both needed a bathroom badly, but I insisted there wasn’t time. Our waiter at Cafe Argana had served me before, and we recognized each other. He, like so many of the Moroccans I know, understood the importance of levity and laughter, so he joked amiably with us each time he passed our table. A young American couple sat nearby, discussing how they wished their still-wet henna designs were permanent tattoos. A Moroccan kid, no more than ten years old, squeezed in behind Natalie’s chair to take pictures of Djemaa El Fna, and occasionally, tourists whispered happy apologies in myriad accents while they leaned over our teapots to snap the sinking sun. Marrakech was so hot that day that Natalie and I had spent the afternoon shadow hopping; between our aching bladders and our scorching skin we were anxious for the sun to quit. But, it clung tenaciously to the sky. Finally, it dipped below the horizon and one by one the bright light bulbs hanging from each of the booths began to glow, illuminating the delicacies of Marrakech: dates and apricots, pots of snails and pots of harrira, servings of sausages and dished up tanjia. “I see what you mean,” Natalie said from behind her camera’s viewfinder. “The square is shinning.”

I’d made a habit of sharing a chicken bastilla at the same table on Café Argana’s terrace each time one of my friends visited Morocco. “Of course you did,” a Moroccan friend said yesterday when we were discussing the bombing. “Everyone did. It’s the best. Everyone goes to Argana.” Then, he lowered his head and said: “It’s not right. How could someone do something so terrible? That’s not Islam. That’s not Morocco. I hope you know that.” I nodded and said I did and we resumed worrying: about his friend that worked nearby, about my waiter from a few weeks ago. 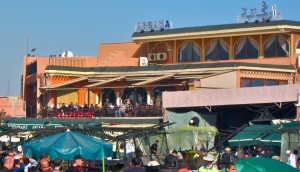 After that last visit to Marrakech, I came home and found a concert in downtown El Jadida. It was warm outside and the whole town was out for the party. The bands were mostly local and they were surprisingly good. They sang in English and French and Darija and Arabic. I wandered through the crowd dodging strollers and dancing two-year olds and swaying dads with daughters on their shoulders. In the grass, kids joined hands and twirled until they fell down giggling and dizzy. I thought: this is what Park Slope would look like if you passed out djellabas during Celebrate Brooklyn. And everywhere I looked people were holding each other because they were happy. This is Morocco:

And that’s what makes me so sad about Thursday’s events. This isn’t a country where bombs go off; it’s a place where people you’ve only just met invite you to tea or lunch and insist you eat until you’re stuffed. This is a country of amazing linguists. It’s a country of stories and storytellers. It’s a country where you can watch an evening come to life from a beautiful terrace. It’s a country where people laugh often, and laugh well. I’m so sad for Marrakech and the tragic events that occurred there Thursday. I’m angry that innocent people died, and that someone willingly marred the reputation and the tourism industry of a country that dearly loves and needs their tourists. But I’m also confident in the wonderful Moroccans. They will rebuild and survive and the country will continue to evolve in uniquely Moroccan ways. They’ll show everyone that this is a safe and amazing place to visit. And, inshallah, the tourists will continue to swoon over smells and monkeys and the snakes and the storytellers and the performers, just as they have done for hundreds of years, because the spirit Djemaa El Fna has more power than any bomb.

The sharqi blew the streets of Tangier and Tetouan clean. So we climbed into a grand taxi and blew ourselves away too.  One hour of winding Rifian roads later, we found the sun hanging over a city washed with blue. Joni describes the way I feel about Chefchaouen best: Ink on a Pen/Underneath the Skin/An Empty Space to Fill In.

Outside the bab in Essaouira, an amateur, amateur photographer lies in wait: 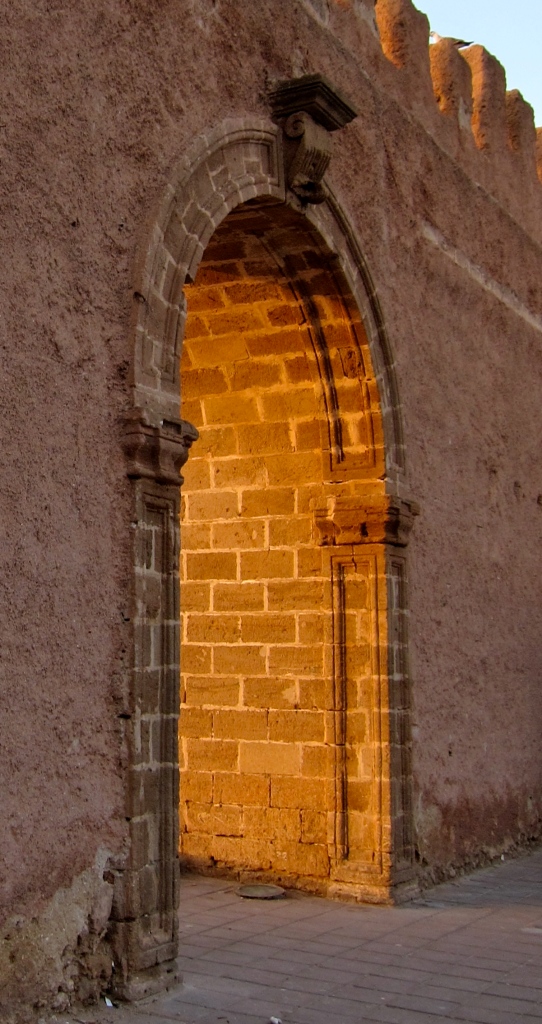 I heard about Mogador before I landed in Africa. An older adjunct at the university where I taught in Brooklyn narrated the story of adventuring with his family through Morocco in a VW van. “Essaouira was great in those days,” he said. “It was the 70s. About five minutes after I rolled in, a kid asked me to buy him booze. You could only buy it with a foreign passport, you see. I told him sure I would if he’d score some kif for me. He did. It was that easy then.”

I heard more stories, too: supposedly, Hendrix wrote Castles Made of Sand while he was in Essaouira. This turned out to be untrue, but I liked the story for egocentric continuity; in one college apartment, my rooomates and I adorned our living room wall with paper and spent weeks working on a pointalist portrait of melting castles.

I forget sometimes, now that I’ve lived here for a few months, that I’m just a visitor. I forget that most of the American writers who loved Morocco lived here much longer than I have. I forget that grants and studying abroad and being an expat is like borrowing a library book whose pages you can climb into. And for a little while, you write yourself into those pages, effectively changing the narrative of the place, of your own life. There are options, of course: return the book, renew it, allow it to become overdue. Still, the original story belongs to someone else. Or does it?

Ultimately, Essaouira was disappointing. Likely, this is because I had so many preconceived ideas about what I would find there, most of them sourcing from the idealized orientalist perspective of beat-generation writers. But what I’ve come to love about Morocco is how bizarre and mystifying it is, how hard I have to work to get through each day, how generously and kindly my neighbors and friends treat me.

An example: a few days ago I received a pink slip under my door. Since I cannot read Arabic script, I guessed it was a notice about my water bill from the illustration in the corner. At the time, my cell phone wasn’t working and various trips to the local Maroc Telecom had resulted only in some customer service receipts and instructions to wait a few more days. When I needed my friends, I went to their houses, and like the Moroccans in my neighborhood, I called out for them until they poked their heads out the windows. The point being, I couldn’t call my landlord. So, I went to the cafe on my corner, had a conference with four or five of the regulars and the waitress until we decided my water would likely be shut off that day. It wasn’t. When I did show my landlord the notice he said, mashi mushkil. And then he left. I still have water. This is my enigmatic Morocco.

In Essaouira, I didn’t feel the spirit of cultural emersion I’ve grown so accustomed to. I watched a lady in linen scarves breeze onto a rooftop bar where the band was playing Bob Marley, and I said to my companion, “She’s one of those whispy women who believes in the magic of Morocco.” No less than five minutes later, the woman cornered me. She talked about her experience playing with “native children who couldn’t even speak French.” She went on to explain that she, “liked Morocco better than South America. There’s just so much more magic here, I guess. It’s raw. It’s untamed.”

The thing is, it’s not my right to criticize this woman. After all, I am an American charmed by Morocco. I barely speak the language. I chose to sit on a rooftop where I sipped an alcoholic beverage and listened happily to a band that played old-school reggae. And it’s not fair to say that Essaouira is overly touristic when I was only a weekend tourist myself. The truth is, I met a wonderful young woman named Charifa who told me, in Arabic, about her upcoming wedding this summer. I laughed with some ladies about my silly-sounding Arabic at the port. I went strolling and watched Moroccans buying papers of chic peas, just like they do in El Jadida and in many other Moroccan cities. I have to remind myself to look closer.

Because this trip, for me, is all about narrative. I’m writing my own and listening for new stories. And when I look closely, I see them intersecting everywhere. My favorite memory from Essaouira? Hanging out next to a bab and watching the world go by one story at a time.